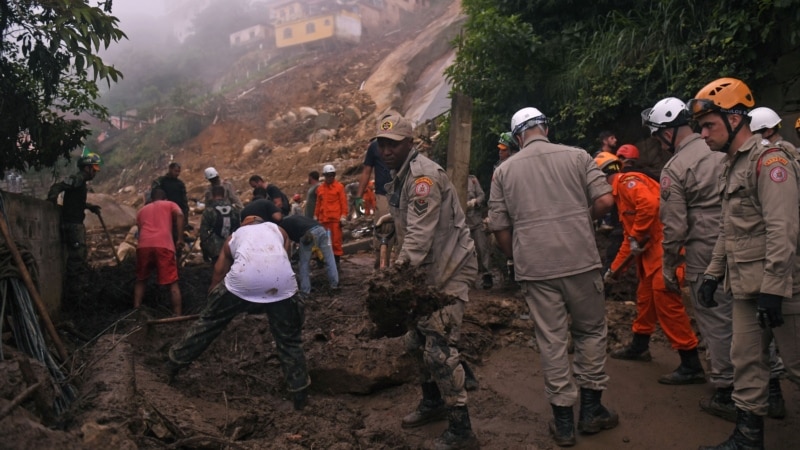 Rescue workers pulled more bodies Saturday from the muddy wreckage left by devastating floods and landslides in the Brazilian city of Petropolis, where the death toll rose to 146, including 26 children.

In a dense fog, workers dug with spades and shovels through the rubble and muck for a fifth day with little hope of finding more survivors.

An AFP photographer saw rescuers carrying out two recovered corpses in body bags in the hard-hit neighborhood of Alto da Serra, as relatives sobbed in the street.

In the heart of the disaster zone, rescue workers occasionally blew loud whistles to call for silence and listen for signs of life.

But authorities say there is little hope at this point of finding survivors from Tuesday’s torrential rains.

The downpour turned streets to gushing rivers in the picturesque city in the southeastern mountains and triggered landslides in poor hillside neighborhoods that wiped out virtually everything in their path.

Officials say 24 survivors have been rescued, but that came mostly in the early hours after the tragedy.

Meanwhile, 91 of the 146 bodies recovered so far have been identified, according to the police. Many of the missing may be among the unidentified bodies. But the numbers have been hazy, and it is difficult to know how high the death toll could go.

President Jair Bolsonaro, who flew over the disaster zone Friday by helicopter, said the city was suffering from “enormous destruction, like scenes of war.”

Tuesday’s storm was the latest in a series of deadly storms to hit Brazil, which experts say are made worse by climate change.

Normal life has been slow to return to central Petropolis, a tourist town that was the 19th-century summer capital of the Brazilian empire.

People were busy cleaning out shops in the city center, where little was open besides essential businesses such as supermarkets and pharmacies.

One bookstore owner had to dump her entire stock of water-logged books in the street.

“They were stocked in the basement. It filled with water all the way up to the ceiling,” said Sandra Correa Neto, 52, her thousands of books waiting for the city’s overloaded sanitation workers to collect them.

“We’re so sad to lose all these books. We can’t even donate them, they’re too damaged. It pains me,” she told AFP.

In the Alto da Serra neighborhood, scene of the worst landslide, rescue workers in bright orange uniforms kept up a slow, dogged search alongside exhausted residents looking for their missing loved ones.

Authorities say the mountain of mud and rubble is unstable, so the search is being carried out with hand tools and chain saws at the hardest-to-reach spots.

It would be too dangerous to bring in the excavators being used in less difficult zones near the bottom of the hillside, said Roberto Amaral, coordinator of the local fire department’s special rescue group.

“It’s impossible to bring in heavy machinery up here, so we basically have to work like ants, going little by little,” he told AFP.

A sobering series of funerals, meanwhile, continued at the city’s main cemetery, where 90 victims have been buried so far, 44 on Saturday alone.

If you’re trying to get rich working for someone else, then the best of luck to you. From a practical sense, the only...
Previous articleAgeing: Mental speed stays high until age 60
Next article9 Backyard Pavilion With Fireplace Ideas 2022